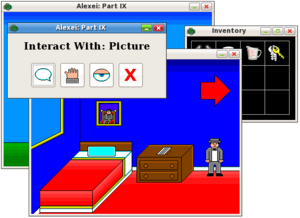 You take the role of Alexei Volkov, master criminal, who is intent on robbing the house of a cruel and ruthless businessman. After gaining access to the main hall with the help of a disgruntled servant, Alexei must search out the mansion and find out the location of the owner's vault. Once this is accomplished, he must escape the not so deserted mansion, a task which he succeeds at, but not before having an encounter with the furious owner of the house. After a lucky escape, Alexei manages to escape the mansion grounds with his loot in hand.

The game takes heavy inspiration from the Arthur Yahtzee Trilogy, and many aspects of the games design and interface are modelled after it. The original concept was thought up by Hamish Wilson after playing the aforementioned trilogy in late December 2008, but no work on the actual game was done until April 18, 2009. After a month of development, Alexei: Part IX was finally finished on May 18, 2009 (Victoria Day), and was released one day later. Previous intended release dates include April 25, 2009 and May 13, 2009 (Hamish's birthday). Malcolm Wilson Multimedia converted the public domain background MIDI files to Ogg Vorbis and recorded some of the game's sound effects. On May 31, 2009, version 1.2.0 was released featuring several bug fixes and various other minor changes. Two months later, on July 31, 2009, version 1.2.5 was released, fixing numerous bugs as well as putting an end to the long standing problem with the Alexei: Part IX Fedora RPM package. Over a year later, on June 30, 2010 the game was updated to version 1.2.8 to allow it to run better on more systems.

The game contains two tracks of Russian origin to suit the protagonist's name, the two tracks are "Down Along the River Volga" and "Cover Fire", the later serving as the game's opener.

The name "Part IX" is based on the crime "theft of property" being ninth on the Canadian Criminal Code, and not that it is the ninth Alexei game. It is in fact the first, though more may follow.

Inside the Servants Quarters, a computer can be seen running on the dresser. On screen, you can see Donut Quest being played.

If you interact with the bookshelf in the office portion of the game it will list a series of book titles. One of them is the name of the first game in the Arthur Yahtzee trilogy and one of the others references The Selfish Gene, an influential biology book by Richard Dawkins.

Katerina, Prescott's lover/victim is named after Katerina Bartikovsky from Red Dwarf: Back to Earth, and Prescott's introductory line is based on some of her dialogue in the show.

Alexei: Part IX as of August 19, 2009 is ranked 13th in popularity on the Freecode page for the Gambas category. It has a popularity score of 9.00. This is since August 13, 2009. A blog entry by Hamish Wilson mentioning Alexei: Part IX appears on the first Google Search page if you enter the game's name; there would probably be more hits if Alexei were less common a name. For more Freecode statistics: click here! spheris5 on the Gambas Forum complimented the game.

A search of sites such as the Libregamewiki, Freecode and SourceForge by Piga Software on April 12, 2010 found Alexei: Part IX to be one of the most complete and polished entirely free software point-and-click adventure games currently available. Alexei: Part IX is also included in Linux Links' list of "Adventure games".