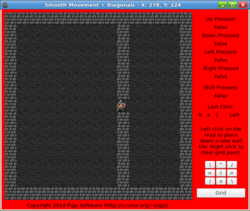 The earliest version can be traced back to the "Smooth Movement + Diagonals" demo released on September 1, 2014, wherein tile data is stored in a two-dimensional array that is displayed within a drawing area. Dynamic elements, most notably the player character, are rendered atop this as independent picture boxes. This allows sprite animation and movement to be done without having to redraw all the background tiles. This was not previously viable until the Qt 5 and GTK 3 toolkits were adopted by Gambas. This draft was later used as the basis for Hull Breach, created for the December 2020 LibreJam contest.

Retrieved from "https://pigalore.miraheze.org/w/index.php?title=Gambas_Tile_System&oldid=1156"
Category:
Cookies help us deliver our services. By using our services, you agree to our use of cookies.