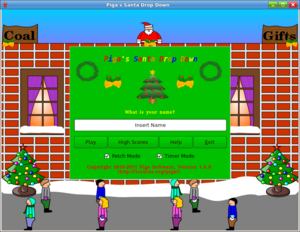 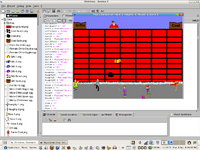 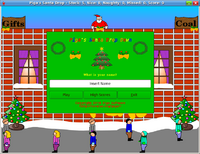 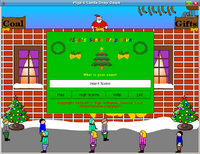 After the game was released it was played and decently well received by several members of the Gambas Forum. Through this testing, several bugs were found in the initial version. None of these were major gameplay or engine bugs but just slight annoyances. Nevertheless, Graham L. Wilson decided that he would write a bug fix release and send it out on Eastern Christmas of Orthodox or Coptic tradition unlike the conventional Western Christmas of Catholic and Protestant tradition that the first version was released on; knowing about this date due to a partial Polish Ukrainian ancestry and understanding full well the irony given Santa does not feature that culture. Work began on it shortly after the release of Piga's New Years Dodge 'Em and, with only occasional effort, he managed to get the version completed by the evening of January 6, 2011 and sent it out by January 7th. The new version was primarily small fixes like correcting a top bar titling bug and correcting the placement of the holding sacks. The most important change was the introduction of a help and information window, after an issue was raised as to how one would learn the game controls.

Retrieved from "https://pigalore.miraheze.org/w/index.php?title=Piga%27s_Santa_Drop_Down&oldid=491"
Categories:
Cookies help us deliver our services. By using our services, you agree to our use of cookies.