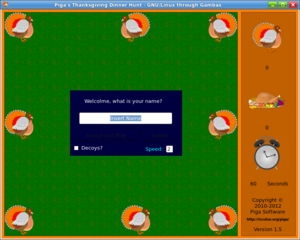 On April 1, 2011, a joke image was released by Graham L. Wilson proclaiming to be a screenshot of an upcoming sequel called "Piga's Thanksgiving Dinner REVENGE!" promising that "all the while folks like you were roasting poor defenceless turkeys, they were collecting names and now they are after you! In this innovative first-person shooter we offer the players the chance to become a turkey as he tracks down and roasts all those that would have roasted him!" On the theme and date, he also noted "Out of season I know... or is it?" and finally "Warning, game may not exist on this point on the probability axis. See today's date for more details...". The image is based on a conceptual game engine Graham was working on at the time, and the joke was first thought of during the development of the actual Thanksgiving Dinner Hunt and saved until April 1 the following year. The farmer and cow clipart later reappeared in decoy mode. The shot was based on the then in-development Gambas Scaling Engine.