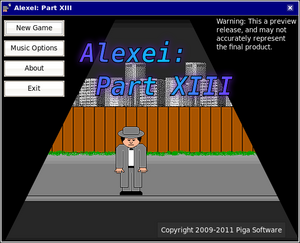 Alexei: Part XIII is a project to create a sequel to the 2009 free software adventure game Alexei: Part IX, which will feature a revamped version of the Gambas Adventure Engine. New features of the engine include more advanced object interaction and a more modular design, cleaner code and interface, as well as features such as fully animated cutscenes. This article will only contain information related to what is contained in the released preview release.

The game opens with scrolling text, presumably written by Alexei Volkov, detailing his plans to steal the legendary Facticius Jewel. The jewel was originally created as a fake, but was so well done and so detailed that it actually became more valuable than the original diamond. Because of its inflated value, two families fought over the ownership of the jewel for almost a century until it was finally decided that the diamond would be hidden from both of them in one specific location. This locations was soon lost to memory and gained an almost mystic quality. Alexei has, however, managed to discover the location of the diamond and under the cover of darkness decides to take it for himself.

Upon entering the factory where the jewel has been kept, Alexei becomes surrounded by well dressed agents before he is able to complete the heist. The agents inform him that they are well aware of who he is and his criminal dealings, and could quite easily have him arrested. Instead, they decide to give Alexei the option of working for them; offering him a full pardon if he decides to work with them long-term. Lacking any other options, Alexei accepts their offer. His first task is the recover the financial records of a local shady businessman who the agents suspect is guilty of tax evasion. Alexei soon discovers that this businessman is no other then Anthony Prescott, and although he was barred admittance into his casino, he nonetheless manages to enter through a carelessly open window... 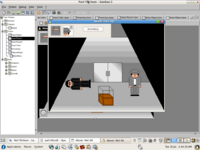 Work on Alexei: Part XIII began soon after the development of Alexei: Part IX ended. Hamish Wilson had found a wealth of public domain Russian and Soviet music, and had several ideas about how the game and its engine could be modified and extended. The first game was completed in only two months, and as such was not the most efficient and had several places that could be optimized.

By the end of the summer of 2009, the object interaction and inventory code had already been revamped, with the interface undergoing considerable changes later that fall. Development experienced a brief pause in the months between October and December, due to downtime of the developer's main computer, but was resumed again by the beginning of 2010. The new year brought further changes to the games interface, as well as the initial code for the animated cutscenes written by Graham L. Wilson.

By the summer of 2010, it was decided that the project would release a preview release of the first part of the game by the end of August, in order to help drive up support for Piga Software and also to potentially tap into certain aspects of the open development model. Unforeseen circumstances delayed the release date until at least Christmas 2010, with the actual preview release not being released until a week later on New Years Day 2011.

The full game is planned to consist of eight distinct parts, featuring their own environmental graphic styles and music track. Each will include several different animated cutscenes to help drive the story. The initial preview release shows only the first area ,which shows off the game mechanics and an introduction to the game's story.

The preview release contains two tracks of Russian origin to suit the protagonist's name. The two tracks are "A Dark Night" (from the Soviet movie Two Warriors) and "Cover Fire", the later serving as the game's opener.

The name "Part XII" is based on the fact that crime regarding conspiracies are the covered by the thirteenth part of the Canadian Criminal Code.

The opening sequence featuring the scrolling text accompanied by the sound of typing is inspired by similar scenes form the Penumbra series by Frictional Games.

The agent that stays behind to watch Alexei is identified as "Agent Ross", the same surname as the main CIA agent from the British spy drama The Sandbaggers. All of the agents featured in the game are intended to have surnames taken from the show.

During the game's development, the agents were referred to as looking like they were from the Men in Black films.

On one of the walls of the casino is, written in spray paint, the words "Jones is a Winker". This same text is often found in parts of the Arthur Yahtzee Trilogy.

The entrance to the casino is modelled after the casino found on Tarabis 6 from Rob Blanc III: The Temporal Terrorists.

Note: This is a preview release, so it is incomplete and my contain errors. The following tarball contains the games source code as well as a compiled executable.

Retrieved from "https://pigalore.miraheze.org/w/index.php?title=Alexei:_Part_XIII&oldid=1284"
Categories:
Cookies help us deliver our services. By using our services, you agree to our use of cookies.