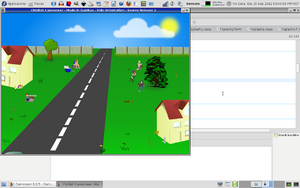 Childish Cannoneer was a venture of the "Indie Games" project hosted by White Island Software at the Gambas Forum (now Gambas.One), participated in by Piga Software through Graham L. Wilson. The aim of the project was to make computer games to show off the Gambas language and run-time, with the eventual hope of inclusion in the Humble Indie Bundle for maximum attention. It was to feature a little boy building a makeshift air cannon from spare parts only to terrorize his older sister, and potentially the whole neighbourhood. 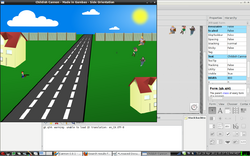 The concept was derived from a stray comment by Graham L. Wilson about the potential for one day having a game written in Gambas included in the Bundle, in reference to the continuing development of Piga Software and its games catalogue. This was taken up by konaexpress on April 19, 2012 as a possible venture to be undertaken in order to promote both Gambas and the Gambas Forum hosted by White Island Software. He also pitched a game concept for this on April 14 as: "I was thinking of an angry birds kind of game where an angry little boy launches frogs and Mentos/soda bombs at his big sister and her friends. He would find parts to make things like a catapult to a compressed air frog launcher using and old scuba tank and parts. If he hits mom or dad, its going to be a bad day! Could you see mom hanging the laundry and getting hit with a frog and then dad chases him down with a 2X4 or something? When he gets you, he takes some of your supplies away and you have to hunt for new ones?" Graham Wilson came up with the working title of "Childish Cannon", later embellished to "Childish Cannoneer".

Thus Graham agreed to attempt such a concept, stressing its value as an expositional game, and began prototyping it shortly afterwards. He chose to do it in picture boxes, utilizing the new transparency options through Qt/GTK+ in Gambas 3.x, rather than using a drawing area or SDL-based OpenGL window in order to facilitate speculative future porting to Microsoft Windows through Visual Basic .NET (and so meet the operating requirements of the Humble Bundles). He first started it as a forward-facing game, due to the basic orientation of the graphics he acquired from Openclipart, but per designer request he also soon created a side-ways view as well. The current source release has basic aiming working in the forwards view, and ammunition and parts gathering completed in the side-ways view (complete with a working inventory system). In addition, the cannon is built from the neighbour's yard, with road crossing adding a Frogger-type aspect to the game. The boy may also come up and talk to the various characters in the game world, though rarely to a pleasant reply. The game's sounds all come from the library at SoundBible. It was released on May 13, 2012, the same day as Soul Capture, and ironically the day that Graham turned eighteen and thus no longer a "child" under Albertan law.

Immediately after the first source code release was sent out, Malcolm Wilson Multimedia expressed interest in working on the game's graphics, and quickly did a complete go-over of the present stock; most notably invigorating the game's backgrounds. With this, it was originally decided that a second source release would soon be sent out purely to show of these aesthetic upgrades. Development of the second source release was delayed by various distractions, apart from a joint effort by the team on the splash screens, and as such proper work on it did not resume until September 2012. On September 10, 2012 a massive bug fixing jaunt put the project back on a proper track, correcting various visual issues and refining the collisions system, and new functionality and finalization was completed on September 15, 2012. The new features include a functional system of firing frogs from the cannon, with working ammo and hit-scan calculations, and the inclusion of new in-game obstacles such as trees and the ability for frogs to be hit by passing cars. Later versions would have expanded on this functionality and try and get feature parity between the two orientations.

Other ideas for the "Indie Games" project have revolved around doing things with OpenGL in at least limited three dimensions, as suggested by Steve "sholzy" Holzfaster, with konaexpress expressing enthusiasm towards: "a Van Helsing theme with classic monsters with a few new ones to flesh it out. Give the user cool weapons like the gatling-crossbow and a shotgun shaped like a filibuster that shoots a wad of silver coins. You could easily add in some Steam-Punk stuff too. I could go on and on for something like this. Find treasure and buy stuff from gypsy caravans and stuff like that."

An additional idea: "A trading game combined with the old Stryker 1945 top down shooter with some Deislpunk thrown in. Fly goods to other ports, cities and bases. As you journey farther out and do runs for people/government, more ports and options are available."

The project later entered development hell due to a lack of broader participation and the demands of other projects.

Retrieved from "https://pigalore.miraheze.org/w/index.php?title=Childish_Cannoneer&oldid=1273"
Categories:
Cookies help us deliver our services. By using our services, you agree to our use of cookies.