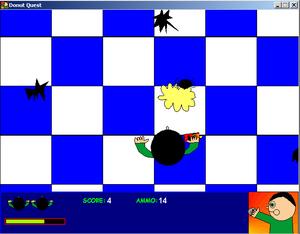 Donut Quest is top-down action video game for Microsoft Windows written by Piga Software for the Brogo web comic strip, released on October 30, 2006. It features the Brogo character Ed Donut (Michelle the mechanic's lazy, dim-witted, and donut obsessed assistant, who is also known to have confrontations with spiders), as he fights his way against spiders in a donut factory.

The game is typical of the top-down scrolling genre. Enemies and collectibles come down at the player from the top of the screen, much like a downwards treadmill, which simulates a sense of the player's own movement upward. The player can move left or right to avoid incoming spiders or collect donuts, ammunition, or health packs. The player can also move limitedly up or down for additional control.

If the player has collected a spray can of insecticide it may be used to fire gaseous clouds of it upwards at any incoming spiders, and if it hits the spiders they cough and fall onto their backs dead, no longer able to harm the player. The player must collect more spray cans in order to continue firing and repeated hitting of the fire button will produce rapid fire.

If the spiders, while alive, collide with the player than Ed will shout out and and his health bar will decrease. If the health bar reaches zero, the player will be brought back to full health at the cost of a life. If the player is out of lives, than the players dies. The collection of health packs will bring Ed's health back up without costing lives. The player must continue up through the level, which due to probability is slightly different each game, until he reaches a yellow and white striped finish line. This will take the player to the next level.

Old Hairy, the final boss, appears at the top of the final boss level. Once encountered, the game ceases to scroll and Old Hairy and Ed's positions remains constant. The giant spider will then fire collections of large black cobwebs down at the player, which will inflict serious damage if they hit Ed. If the player reaches a high enough score by collecting donuts, then the bonus level will load up. This level contains no enemies but lots of donuts.

One day Ed Donut is watching the news, when he hears that a donut factory is closing. As anyone would expect, Ed rushes over to the factory. Ed finds hundreds of donuts, but also encounters thousands of spiders. He gets a spray can and battles the spiders for the donuts... how Canadian.

After fighting through spiders and collecting many a donut (and poison spray cans), Ed enters the wrecked and structurally insecure interior of the factory. Ed looks around for more donuts, but then comes across the largest spider ever seen by man: he is "Old Hairy", the master spider. There is a pronounced battle between hominid and arachnid which Ed eventually overcomes after much struggle. Outside, he hears the sound of workmen approaching the building to begin the demolition. "5, 4, 3, 2, 1!" Ed makes out, before he jumps out of a closed window just as the building implodes, covering him with ash and knocking out some teeth. Ed then considers his previous actions. "Maybe I should not have done that.... Nah!!!"

The lowest form of donut, provides the least points.

Better than the frosted variety, but not as good as the others.

The second greatest donut in the game.

The best donut in the game, providing the most points.

Provides Ed with a weapon to spray the incoming spiders with; if the spray contacts donuts they disappear contaminated.

Spiders descend towards the player and cause health damage if contacted with by Ed.

Old Hairy swivels from side to side shooting out massive webs that can injure Ed.

The game was made using Game Maker 5 on an old laptop running Windows 98 Second Edition. They game has been successfully tested on Windows 95, Windows 98, Windows 2000, and Windows XP. It has not been tested on Windows Vista or later. The game is available on Download.com and various other mirrors as well as on the Piga section of icculus.org.

Malcolm Wilson Multimedia created the original graphics and music for the game. MWM would later do audio work for Alexei: Part IX and create the soundtrack for Windys, among other work. An update had been in the works since December 22, 2007, but was never released. An eventual cross-platform version via G-Creator was hoped for, and an HTML5 version via a later version of GameMaker: Studio is being considered.

Donut Quest has been successfully run from Fedora 7 onwards using various versions of Wine, and will presumably work on most other GNU/Linux distributions. All parts of the game seem to run well, except for the background music, which requires support for MIDI support in Wine to be enabled. The fire work menu effects also occasionally cause troubles or slow downs. Game Maker 5 also runs in Wine, and has loaded up the Donut Quest project file (.gmd).

Donut Quest is released under version two of the GNU General Public License, however it was built in the proprietary software game creation application Game Maker 5. With the demo version you can only edit it with restrictions, and you may need to remove some features such as the menu fireworks in order to compile or run the program. Although not required by license, Piga Software offers potential modifiers of Donut Quest to send their modified versions to them, so that they can compile it. The source code, a Game Maker project file, is included with the program, and all modifications have to, as per the license, be re-released under the GPL (either version two or, at your option, any later version).

As of February 1, 2014, Donut Quest has been downloaded 458 times from Download.com, including two the previous week. Donut Quest related results showed up on the first page when the game's name was entered into Google Search on August 20, 2009, only being distorted by by both Donut Quest and Donut Quest II, games created in TI Basic, "Cider Donut Quest", an article about finding cider donuts in Seattle, and Donut Quest, a 2008 comedy film. As of Fenurary 1, 2014, the game now shows up on the second page via the Piga Software Forum section, and on the third page via its Libregamewiki entry. xantan51 commented that the game was too easy, which influenced the design of Windys.