The Gambas Adventure Engine is a free software graphical adventure game engine created by Piga Software. It is designed to be similar to the engines powering the Arthur Yahtzee and Rob Blanc (Adventure Game Studio) trilogies. The engine itself has been utilized in the games Alexei: Part IX and Alexei: Part XIII. It is the only Piga engine written by Hamish Wilson, the rest being done by technical director Graham L. Wilson.

The initial Gambas Adventure Engine closely resembled many aspects of Arthur Yahtzee. The engine itself had most of the features found in Arthur Yahtzee, although GAE did not support character animations or interaction between collected objects as Arthur Yahtzee does. One new feature thought up specifically during the development of this version of GAE is the inclusion of a "knowledge" window, which lists all the thoughts and knowledge the player has collected throughout the game. In total, the engine supported object interaction, collection, secrets gathering, sound effects, multiple music tracks, and the ability for the player view and touch objects, as well as primitive talk functions.

A more modern version of the Gambas Adventure Engine was showcased in the Alexei: Part XIII preview release. Changes to the engine include a more streamlined interface with less open windows, an overhaul to the inventory system to allow for collected object descriptions and more intuitive usage, support for the player to change direction, the addition of a graphical cutscenes, a proper talk system, as well as substantial changes to the underlying code to more efficient and easier to develop. 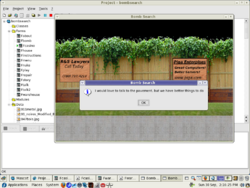 Work on the Gambas Adventure Engine started in June of 2007, with the development of a game called "Bomb Search", where the player character had to find various clues in order to deactivate a large nuclear bomb. Although development continued on this project for about a year, it was later dropped in favour of a new design. A new implementation of GAE was created during the development Alexei: Part IX, which was released on May 19, 2009.

Retrieved from "https://pigalore.miraheze.org/w/index.php?title=Gambas_Adventure_Engine&oldid=1290"
Categories:
Cookies help us deliver our services. By using our services, you agree to our use of cookies.