A similarly named and functioning scheme is used in PS Tech, but with an added height system. 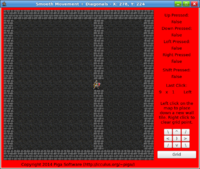 After further research, this was plan was modified and unified in January 2014 towards the idea of a single renderer based on the strengths of each system, using the DrawingArea for terrain and environment and PictureBox controls for units, allowing for them to be re-drawn separately from the game map. This was not previously viable until the GTK 3 and Qt 5 toolkits were adopted by Gambas 3 providing transparency for controls. This approach has proven consistently reliable and performant, with equivalent or less CPU load than comparable implementations in Pygame and similar. A version of this without tiling is present in the latest version of Piga's Santa Drop Down from 2016.

This lead to the the "Smooth Movement + Diagonals" demo released on September 1, 2014, wherein tile data is stored in a two-dimensional array that is displayed within a DrawingArea with a PictureBox used for the player character. This draft was later used as the basis for Hull Breach, created for the December 2020 LibreJam contest, and had also been forked and modified for other in-house projects that have not yet been finalized.

Retrieved from "https://pigalore.miraheze.org/w/index.php?title=Gambas_Tile_System&oldid=1369"
Categories:
Cookies help us deliver our services. By using our services, you agree to our use of cookies.