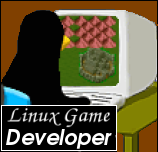 Linux Game Developer is a section hosted by Piga Software that attempts to help aspiring developers to create free software games for the GNU/Linux platform. This site is aiming to host tutorials, multimedia resources, and provide links to the best and easiest game creation tools in the world of GNU/Linux development.

Made a game for another system, and want to give it GNU/Linux support without porting it?

Note: in general we recommend a native port as they run better than emulation-based solutions.

Retrieved from "https://pigalore.miraheze.org/w/index.php?title=Linux_Game_Developer&oldid=1043"
Category:
Cookies help us deliver our services. By using our services, you agree to our use of cookies.