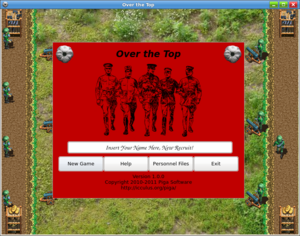 Over the Top is an action game set in the trenches of the Western Front during the First World War.

The player takes the role of an unnamed soldier in the trenches of the Western Front. It is never stated what nationality he is, though it would have to be one of the Western Allies, most likely either French or Commonwealth (then the British Empire), given the entire span of the war is presented within. The first soundtrack piece is a British recruiting song, so that may give some hints, though the American song "Over There" plays for the 1917 push - when the Americans joined the war.

The player can be moved around with the arrow keys, and the objective is get out of the trench, cross no man's land, while dodging invisible machine gun fire, and storm the enemy trench - either killing (pressing space to fire a side arm) or capturing (pressing the enter/return key) the Patroller and Gunners. The player is joined by three other Allied soldiers, but they only are little more than cannon fodder. As a matter of truth, they actually have no offensive programming at the movement - though this may change in later releases.

After storming the trench, the game snaps to the next push a year later - and the player has to go through it all over again. Each year the Germans improve their Gatling guns, and thus they need to cool down for less and less time. This makes each new push more and more difficult. It should also be noted that there are no lives in the game - as in the real thing, if the player dies, he dies and will not get to report in unless he survives the war (1914-1918). 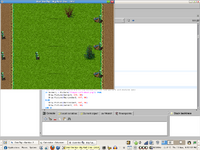 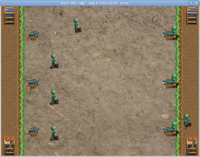 Following the initial prototyping of Piga's Thanksgiving Dinner Hunt, and the successful launch of the third release of Piga's Pumpkin Carving in Autumn 2010, Graham L. Wilson eventually decided to continue the effort by starting a game for Remembrance/Veteran's Day. The inspiration was to create a game that was both somewhat authentic, but more importantly gruelling enough to help represent the horrors of trench warfare and armed conflict in general (Wilson's great-grandfathers were both drafted onto opposing sides - one in the British Army, and another for Austria-Hungary; both became POWs). This is also reflected in the choice of game icon: the white peace poppy, in lieu of the increasingly militarized red poppy normally utilized for the holiday. Although work began in earnest, only a very bare beginning was there by November 11. So he left the game as is, and decided to come back to it next year.

After finishing the next release of Diner Hunt, a "Terrain Model" demo for Gambas Genie and the fourth version of Pumpkin Carving in 2011, Graham finally turned his attention to the completion of Over the Top. At first work went slowly, primarily revolving around a graphical overhaul, bug fixes and the beginning of music and sound selection. The music are all genuine songs from the period, and effort was even put in to roughly match the songs to the appropriate year; a few pieces of vintage war time drawings are used in the menus and displays. Another major effort was put in to show the decay and destruction of the war as supplies dwindle, and the environment gets torn apart. However, work still needs to be done later to make the soldier graphics more historically accurate, as they presently appear more post-Second World War.

As the final of the two week development period approached however, effort sprung into high gear that weekend with numerous expansions and corrections. Even so, several ideas had to be cut from the current build to potentially be added in later releases. A first release candidate was completed by Wednesday November 9, but much more fixes and testing was required still. This pace continued right up to the final hours before midnight struck for November 11, including a tight number of graphical tweaks by Malcolm Wilson Multimedia. The game was uploaded during the rest of the night, and rested on the icculus.org files servers by midday. The build was yet to be fully bug fixed, and thus still had a few rough edges. Even so, play-testing by numerous Piga staff and associates found the game to be enjoyable in its then form. Development on version 1.2.0 began on November 5, 2012 but did not reach begin in earnest until November 10. It was mostly a bug fixing and optimization release and contains no new features. It was sent off on November 11, 2012.

Retrieved from "https://pigalore.miraheze.org/w/index.php?title=Over_the_Top&oldid=1282"
Categories:
Cookies help us deliver our services. By using our services, you agree to our use of cookies.