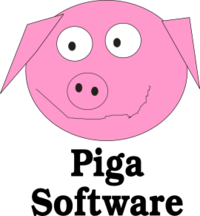 Piga is the mascot of Piga Software, and is most commonly seen in the head display that is in the Piga Software logo. The head was drawn by Hamish Wilson with the assistance of Malcolm Wilson inside CorelDRAW 5. It has also been drawn with quadrupedal legs and posture and even as a beastly biped; it does not yet have a known personality in any published Piga media. The concept of Piga is taken from a plush toy in the shape of a pig that had a voice-box inside that made it oink (it was actually designed as a dog chew toy). The toy was referred to as Piga, and when Hamish and Graham first started Piga Entertainment in August 2004 they chose it to be their mascot and name of the group (previous name ideas had been along the lines of "Wilson Twins Software").

It is also intended to appear as a realized character in some Piga Software games, such as a ruler avatar in Piga Nation. The most prominent appearance for Piga will be as the main avatar for the artificial intelligence experiment Piga Brain. A son by the name of Piget has also been conceived by the Piga Software staff, and could potently be latter used for some educational games (as was prototyped back in the Visual Basic days). A Piga shaped engraving is available to be placed in since version 1.5 of Piga's Pumpkin Carving.

Retrieved from "https://pigalore.miraheze.org/w/index.php?title=Piga&oldid=138"
Category:
Cookies help us deliver our services. By using our services, you agree to our use of cookies.