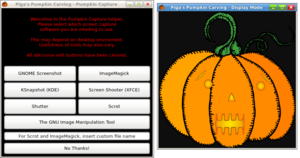 Piga's Pumpkin Carving is a small program in which the user can carve a virtual Halloween jack-o'-lantern written by Graham L. Wilson. The program starts with a bare pumpkin, that the player may add six different drawing objects functioning as carvings onto, and design, their own jack-o'-lantern. 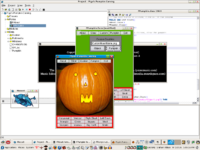 The program was first built for Microsoft Windows in Game Maker 6.1, developed as part of the Piga Windows Entertainment Pack effort. Development of a GNU/Linux version began on October 27, 2008 and it was released on October 31, 2008 (Halloween). Due to a rush to meet the Halloween 2008 release date, the program was limited in its first version. The program was and is released under the GNU General Public License version 3. PigaVision was released on the same day as the first release of Piga's Pumpkin Carving.

The background music track was a shortened version of Bjørn Arild Lynne's "The Spooky Pumpkin Head", used under permission, until version 2.0.0 which featured fully free tracks by Kevin MacLeod under the Creative Commons Attribution 3.0 Unported license. The music editing and conversion to Ogg Vorbis was done by Malcolm Wilson Multimedia.

Development of version 1.5 began on October 27, 2009, a day after the first Source Release of Lamp Refugee was released. This included various tweaks and several new features such as multiple pumpkins, improved graphics, the ability to add custom objects and use custom pumpkin graphics, and sound effects (most edited from Absolute Sound Effects Archive). It was released on October 31, 2009.

Development of version 2.0 began on October 22, 2010. New features included a complete overhaul of the object graphics, the replacement of the music track mentioned earlier, the addition of a mode assisting those who would use a screen capture program to save their lanterns, an additional mode to help load those pumpkins, and algorithms to prevent the ability to place cuttings off of the pumpkins. The new version was released on October 31, 2010.

Development of 2.5 began in 2011 after the completion of the "Terrain Model" technical demo for Gambas Genie, and featured the completion and expansion of a feature first worked on a year earlier - the ability to capture pumpkins and jack-o-laterns by functioning as a front-end for screen capture software. This involved a good deal of research into the topic, and it has the ability to utilize gnome-screenshot, ImageMagick, KSnapshot (KDE), Screen Shooter (Xfce), Shutter, Scrot and the GIMP. Minor bug fixes and updates were of course also added in, and it was released on October 31, 2011.

Development of 2.5.5 began on October 28, 2012 and was primarily oriented towards making a version of the program based on Gambas 3. As such, it was a much more modest release than ones from years past, mostly focusing on bug fixing and tightening the program. The most notable change was fixing it so that it can work with both the Qt and GTK+ toolkits (using the gb.gui component). It was released on October 31, 2012. 2013 was the first year without a release, after five releases over four years. 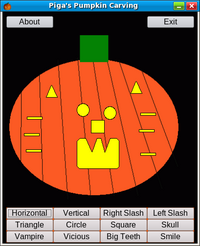 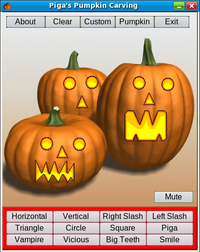 "Today, Halloween 2008 (October 31), I released a Halloween themed amusement game: Piga's Pumpkin Carving for GNU/Linux (written in GAMBAS 1.0.19). The game allows players to carve their own virtual Jack-O-Lanterns, by placing down a variety of objects. Now, I did have a little bit of a rushed dead line to make it by Halloween, so it is a rather small program. Still, it can be of small amusement. Happy Halloween one and all!" - Graham L. Wilson, October 31, 2008

"For Halloween 2009 we now have a new and much improved version featuring multiple pumpkins, the ability to add your own custom graphics, and more! Happy Halloween!!!!" - Graham L. Wilson, October 31, 2009

"For Halloween 2010 I now present the third edition of Piga's Pumpkin Carving, version 2.0.0. This new version features a complete overhaul of the graphics, new fully free music with more options, and modes to aid in capturing and loading your lanterns among other changes." - Graham L. Wilson, October 31, 2010

"Alright, here is version 2.5.0 and the fourth edition for 2011. Apart from a few bug fixes and graphical tweaks, the two major additions is the usage of the new ~/.piga/pumpkin/ structure and the Pumpkin Capture mode that utilizes a large range of GNU/Linux screen capture programs." - Graham L. Wilson, October 31, 2011

"Version 2.5.5 is mostly a big fixing release, as well as porting the program over to Gambas 3; in addition, the option to run this program in GTK has been made available." - Graham L. Wilson, October 31, 2012

Piga's Pumpkin Carving related sites appear first if the game's name is entered into Google Search, but the name is too specific for it to mean much. The official screenshot for version 1.0 appears surprisingly often when searching for Piga Software related topics in Google Images.

Music in version 1.0.0 and 1.5.0 composed by Bjorn Lynne (PRS). All rights reserved. Used under permission.

"I recommend royalty free music from the excellent stock music library at www.Shockwave-Sound.com."