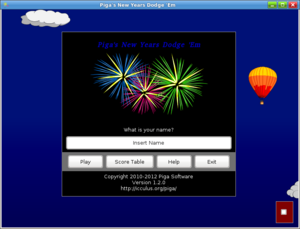 The menu animation shows a hot air balloonist casually flying up through the clouds of the night sky. The introductory cutscene depicts him flying over into a new section of sky, only to start hearing a countdown. He is unable to react before the New Year dawns and the sky around him is filled with celebratory fireworks. It is the player's job to control the balloon and keep it up in the air as long as possible, by avoiding fireworks blasts and minding the limited amount of gas fuel aboard the craft.

The player moves the balloon left or right with the arrow keys, which costs 1% of the balloon's fuel with each turn. Gravity is consistently pulling the balloon downward, and so to keep up in the air the player must periodically press the up key to provide an upward burst, which costs 3% of the remaining fuel each time. The player has five lives in which to attempt to keep the craft up.

The player's score is calculated based on the amount of time the balloon is able to stay in the air, plus the amount of fuel that is left at the end by a quarter margin. The game can be won if the player stays up for 120 seconds (two minutes), and after that the player can take the score as is, plus the 1000 point bonus for lasting it out, or continue playing until all the lives are used up. 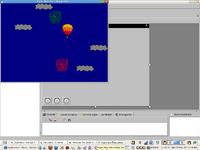 The initial concept for the game was thought up by Graham L. Wilson during the early development of Piga's Santa Drop Down in December of 2010. Considering that the primary celebratory spectacle of New Years is fireworks, he tried to envision a game that could be made featuring them. In the end, he decided for a setup wherein an unfortunate hot air balloonist flies out above an area about to be bombarded with fireworks.

The project file was began even before Drop Down was released, but work was not seriously put into it until December 29, with only the hope of prototyping it to be finished the next New Year's Eve. Development moved faster than anticipated and, at Hamish Wilson's suggestion, it was decided that a version to be released on or around New Year's Day was to be attempted.

Graham contacted Malcolm Wilson Multimedia to start overhauling the graphics on December 30, while Graham started to finesse the engine and work out bugs. This process continued on New Year's Eve and New Year's Day, as the final graphics, music and sounds, final features and the introductory cutscene were put in, as well as final bug testing. The game was released, a little late, on January 2, 2011. The New Year's Countdown audio was recorded by Malcolm Wilson Multimedia and featured the voices of Hamish, Graham, Malcolm and Paul Wilson plus Laura Warman.

Development of version 1.2.0 began on December 28, 2011, and over the next few days the score data save path was changed, the code was modularized, the final win time shortened and other tweaks were added and bugs fixed. It was released on December 31, and is was the last Piga Software program based on Gambas 2, due to the almost synced release of 3.

Retrieved from "https://pigalore.miraheze.org/w/index.php?title=Piga%27s_New_Years_Dodge_%27Em&oldid=564"
Categories:
Cookies help us deliver our services. By using our services, you agree to our use of cookies.