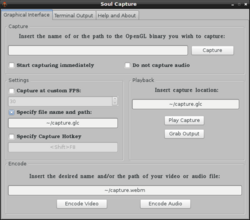 Soul Capture is a free software application developed by Piga Software which was originally released on May 13, 2012. It can be used to capture both the video and audio playback of OpenGL applications such as computer games. It was created in Gambas and works as a front-end graphical user interface for the glc capture program; ffmpeg is also required for encoding. Soul Capture allows users the ability to capture and encode footage of their games and other applications from a comfortable and easy to understand interface.

Along with basic video and audio capturing, Soul Capture allows users to play their captures directly from the generated initial source files, as well as giving them the ability to encode both the audio and video components of their captures into usable files that can be understood by video editors and media players. It also allows for several selectable options to further enhance the abilities of those wishing to record OpenGL playback, including frame rate and audio options as well as the ability to set custom recording hotkeys. 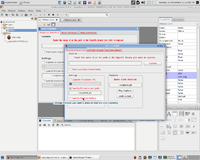 Development began on Soul Capture in November 2011 after Hamish Wilson successfully installed and started using the glc capture program. Most of the work was completed in that month, although the project was stymied until April 2012 when Hamish realized that much of the syntax used in the program could be treated as a permutation problem, as he had recently studied in high school mathematics, thus allowing him to create a much easier to understand and systematic approach to new option entries. The project had its first release on May 13, 2012, the developer's eighteenth birthday. A new version was released the following Easter on March 31, 2013, including a large number of new features, options, and bug fixes.

Retrieved from "https://pigalore.miraheze.org/w/index.php?title=Soul_Capture&oldid=1289"
Categories:
Cookies help us deliver our services. By using our services, you agree to our use of cookies.