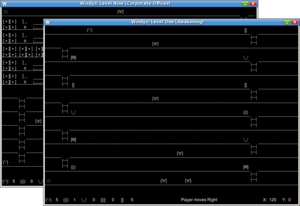 Windys is a free software action arcade platform game created by Piga Software and first released on August 12, 2009. It utilizes the Gambas Platform Engine, and is designed in a deliberately retro-style, featuring ASCII art, simulated PC speaker-type beeps and energetic MIDI soundtrack. It is the second Piga game to be released for GNU/Linux, the first being Alexei: Part IX, and it was followed by Piga's Thanksgiving Dinner Hunt.

The game is a simple arcade-style game. The player, "('_')", must run through a level using the arrow keys, climbing up or down ladders, "|---|", to get to various floors, "----"; the end goal being to reach the level exit, "::". The player's way is obstructed by zombies, "{'O'}", who prowl from left to right on some floors, killing the player if encountered (sending him to beginning of the level and removing one of his lives). To get past these menaces, the player may fire a glob of ketchup, "#", at them. The ketchup is only a short-range weapon however, so the player must get right up close to a zombie to hit it. Zombies also eventually regenerate. The player needs to keep a supply of ketchup packets, "[]", in order to fire. The player may also collect bonus items such as burgers. "(||)", soda, "\_/", or fries, "[||]". There are some areas that are closed off with doors, "| o|", inside of which are usually decorative items such as office equipment or, often humourous, signs. Victor, the final boss, has no attack, except for generating super zombies. Super zombies can climb down ladders to reach the player, and regenerate after reaching the bottom of the level. There are nine levels, plus a boss level and a secret level.

After a particularly strenuous day at work, the player returns to his own personal refuge in the form of the Windys fast food restaurant. Not all is as it seems however, as a new and unconventional manager has taken control, bringing with him an army of undead zombies. The player ignores anything unusual and orders his normal burger, which he gets, with one small difference: it is laced with tranquillizer.

After regaining consciousness, the groggy player makes his way through the hidden back rooms of the restaurant, defeating several zombie hoards along the way with packets of ketchup. The player has to then travel through the store rooms, where various ingredients and condiments are stored behind closed doors. After passing through several more foreboding hallways, the player reaches an odd room where members of the undead army are kept locked away. Heading through several more not-so-deserted back halls, the player reaches the corporate offices and finally Victor's kitchen, where the new manager with the raven dark hair lurks and brews trouble. A battle ensues, with our player eventually being declared the winner, defeating Victor's tracking super zombies. The player finds a stash of specially marked "Zombie Burgers", revealing that the whole undead army's purpose was for a new item on the menu and a flashy new marketing campaign. Unfazed, the player engages in his appetite greedily. 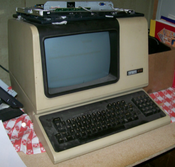 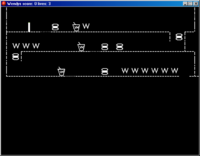 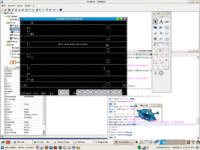 The game has a long history, starting out of as idle childhood character doodles by the Piga Software staff on an old VT131 computer terminal. This was when they were young children and so was long before they knew how to program. The game idea developed was a horror-themed ASCII art game named after one of their favourite restaurants: Wendys. The theme was due to them realizing that "(||)" looked like a sideways hamburger. It proved to be the most endearing of their doodles, competing with other ideas such as the more banal idea called "Factory".

When they actually considered developing it with their since acquired knowledge, they named the project "Windys" to avoid trademark complaints. A short lived attempt was tried on Game Maker in 2006, before that system was deemed to graphically-oriented to truly create the envisioned game. In March 2008, work begun on it in Gambas, which offered a text-oriented display (labels) which suited the project perfectly.

Malcolm Wilson Multimedia composed the game's soundtrack, recorded on the Sound Blaster 16 sound card's MIDI synthesizer for added retro feel. Like Donut Quest, the soundtrack was composed as MIDI files using AnvilStudio, however it was then converted to Ogg Vorbis format using Audacity in order to make the soundtrack consistent on all machines, regardless of synthesizer. This was particularly important given the Sound Blaster 16 note mentioned above (Gambas does however support MIDI playback). Using Ogg Vorbis also offered the advantages of file tagging, and that Vorbis simply can be played with more player programs.

The larger ASCII graphics had to be rendered as picture boxes, which creates less compatibility problems on multiple machines (to combat this, the game had to be tested on a number of computers to see if the labels were large enough throughout to work on most system fonts; often they had to be resized), even if making it less authentic. A similar trick is used for paragraphs starting from version 1.5.0. The sounds were found by the Piga staff scouring the web for the most appropriate sounding beeps and bops, except for the VT131 beep which was actually recorded from the actual terminal.

The base engine was mostly complete by June 2008, and plans were made to finish it by the end of the summer, however, due to various issues, this did not come to pass. Due to xantan51 mentioning on the Piga Software Forum that Donut Quest was too easy, the game was designed with difficulty in mind. There are however, several gameplay tricks that can make the game easier, but they must be learned and are not explicitly stated anywhere in the game's help. Later that year, and in early 2009, the game's levels were completed by Hamish Wilson and all that remained was the addition of various final touches. This mostly happened in development spurts, one in December 2008 (which produced most of the levels), one in March 2009, and finally one in July-August.

A coding rush ensued after the release date of August 12, the fifth anniversary of the founding of Piga Software, was chosen. The first possible release candidate was completed on August 4, and the game was successfully launched on August 12, 2009. The final code check took five hours to complete. The 12th was also decided to be the release date of the modern draft of the Malcolm Wilson Multimedia website, as such to include content from the new joint MWM/Piga venture. The site was uploaded, but the host had been giving scripting errors to any arrivals, and as such was inoperative until it was moved over to icculus.org on July 1, 2011. The Windys MIDI files are now uploaded on the MWM Wiki.

Development on version 1.2.0 began immediately, with several test runs and playthroughs to find bugs. From there, each bug was addressed as it was found, as well as several minor additions. After three weeks of occasional work, the update was released on September 1, 2009. A problem with the handling of the music channel prevented the building of RPM or similar installers in the original version. Work to get around this, and to keep it update, began with attempts to port it from Gambas to Gambas 2; unfortunately this kept running into problems with regards to positioning and collisions. After one and a half years of failure, a workaround was finally achieved and efforts began to tune up the game began in the summer of 2011. Besides porting over to Gambas 2, several updates and bug fixes were added as well as general proofreading. It was sent off on August 12, 2011 to celebrate the second anniversary of the game, and the seventh of Piga Software. The concept of a 2.0 version, featuring a new single-player campaign ("Deep Fat Fried"), a deathmatch-mode and upgrade to Gambas 3, has been considered.

Retrieved from "https://pigalore.miraheze.org/w/index.php?title=Windys&oldid=1286"
Categories:
Cookies help us deliver our services. By using our services, you agree to our use of cookies.